Walk Your Way to Better Business During National Walking Month 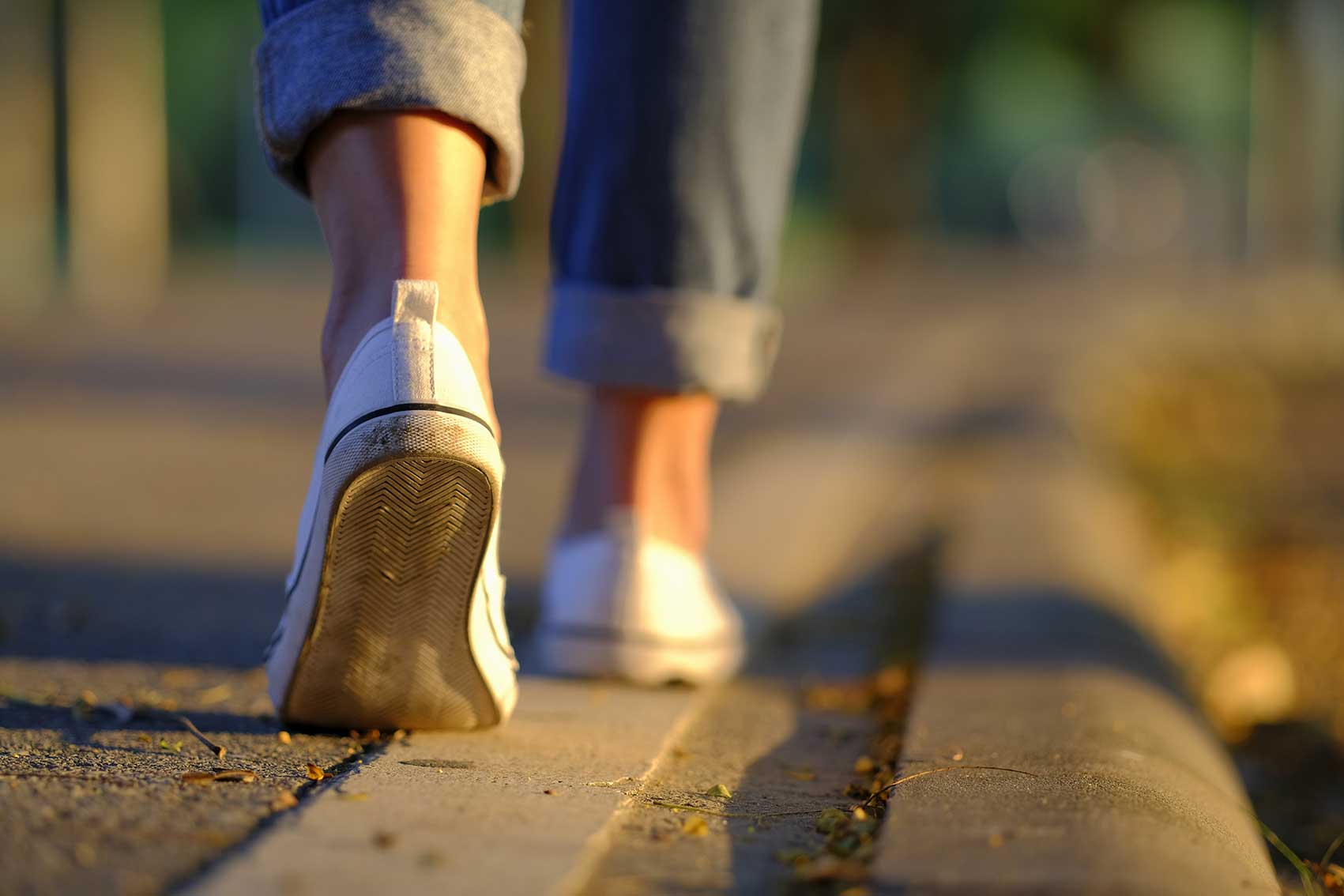 It was in Friedrich Nietzsche’s book Beyond Good and Evil that he declared: “All truly great thoughts are conceived while walking”, a statement that’s since been backed up by numerous studies, not least one undertaken by Stanford University in which researchers found that walking boosts creative output by 60%.

Tech genius Steve Jobs preferred ‘walking meetings’ to brainstorm with his associates, an initiative that’s since been adopted by business big hitters Samsung, Google and Facebook, and successful authors Ernest Hemingway and J.K. Rowling have both claimed that walking is the only reliable cure for writer’s block. It seems pretty clear that walking awakens creative brilliance, but how can this in turn improve your business and your business brain specifically? To celebrate National Walking Month, we’ve had a little think…while walking, obvs.

There’s no way we’re going to get all David Icke and start making wildly inappropriate and inaccurate claims like walking will ‘cure’ your depression or anxiety, that would just be stupid; what we can say with certainty though is that exercise – particularly walking outdoors – can raise your spirits and help you get a bit of spring back in your step.

A common misconception is that exercise has to be a gruelling, sweaty battle of wills to have any ‘good’ effect. This is bollocks, frankly. Really hard exercise can actually trigger the release of cortisol: the stress hormone; levels of which are often found to be particularly high in people with depression. More passive forms of exercise, therefore, are the winners here – not only will a long walk in the great outdoors ensure a steady release of feel-good endorphins, but the colours, sounds and smells of nature’s playground also stimulate our senses, clearing our heads, breaking up any racing thoughts and leaving us with a steady sense of calm.

This is shocking: physical inactivity has been called out by the WHO as the fourth leading risk factor for global mortality, causing approximately 3.2 million deaths across the world; that’s 6%, only 3% less than tobacco. What are we doing to ourselves?!

Loads of us have sedentary jobs, but spending more time sitting than moving can have massive health implications including a greater risk of diabetes, cardiovascular disease and even The Big C. I know, I know, the thought of being able to leave your house multiple times a day for a walk is currently the stuff that dreams are made of, but if you run a company now is the time to take stock and think about some walking initiatives to put in place as soon as we can all resume normal life – copy Steve Jobs and introduce walking meetings; incentivise staff that walk to work by paying towards new trainers; do a staggered sponsored walk… Not only is walking the lowest carbon, least polluting form of transport, it’s free, your legs are reliable timekeepers and it’ll make you happier and healthier. What’s not to love?

It seems a bit weird talking about stress at the moment. Are you stressed? “Well, yeah, a bit, there’s a pandemic killing thousands of people, I have no idea when I’ll get to see my family and friends again, I’ve taken on a new unpaid role as a teacher which I’m shit at, oh, and I’m a bit skint to be honest, so… you know…”

Even the most Zen of us are probably feeling the strain during lockdown, but you know what we do have? Legs. And the option to take exercise daily. A UK study found that walking through green spaces can put the brain into a meditative state and trigger involuntary attention meaning that it holds attention while also allowing for reflection, so get out and clear your head. (Insert ‘walk in the park’ gag here.)

There’s a reason that sometimes we feel the urge to get some fresh air and ‘clear our heads’ – walking does exactly that; it untangles our thoughts and declutters the constant narrative whirring about in our brains. Granted, some people are clearer thinkers than others – I spend far too much time wondering if magpies really are unlucky, what I’m going to have for my next meal while I’m eating my current one and musing on weird conspiracy theories – but all of us at times can find ourselves at a dead end work-wise.

Staring at your computer beside a seemingly endless to-do list that pokes at you like an angry accusation won’t generate new ideas, but heading out to some rolling green space and simply putting one foot in front of the other will give you proper, distraction-free time to think about the next move for your business. Consider a few topics that you want to mull over on your walk before you set off to place them at the forefront of your mind and let your feet do the talking.

The benefits of walking meetings, walking breaks, and even short walks around the office (or your house/garden if you’re a remote worker) are numerous – walking increases blood flow to the brain sharpening the mind, pisses on procrastination’s chips, inspires creativity, and helps with memory.

Thierry Malleret, PhD, co-founder of The Monthly Barometer, a world-leading analytical and predictive newsletter on macro issues for high-level decisionmakers, is known to take his clients into the mountains surrounding Chamonix to help frame issues and clarify decisions while walking, an idea he thought up upon realising that not only are walking and working compatible, but that walking actually improves business outcomes.

Beyond the evidence of the physical and mental benefits that we’ve already touched on, research continually demonstrates that walking physically alters the brain, improving its plasticity and promoting the creation of more brain cells, which equals clearer thinking and better judgement.

Anyone in a long-term relationship and/or with kids knows that the subhead here should read ‘Improve your relationships full stop’. There’s nothing quite like storming out of the front door following an argument then quickly realising you have no idea where you’re headed and that you also forgot your bag so you can’t even go and drown your sorrows in a relaxing pint. Guaranteed, about 15 mins into your post-beef walk, your anger will have diluted into two parts guilt about saying things you didn’t mean and two parts perspective about whether the fall out was actually worth it. Chances are it wasn’t and chances are also that you stormed out without your keys, so before you know it you’re heading back, tail between your legs and making up as soon as your equally rueful other half opens the door.

Walking clears the air. It’s a fact. So, whether you’ve got off on the wrong foot with a colleague or client and want to start afresh, need a brainstorming session with your team about how to generate new revenue, or fancy a change from sit-down meetings, walk it out; a walk together naturally leads to conversation, sharing and decompression of stress, as well as giving you the time and headspace to talk through what’s on your mind.

Since its inception in the early 2000s (which is already 20 years ago. Gulp.), podcast, as a broadcast medium, has continued to evolve and enlighten, becoming a steadfast companion for anyone on the lookout for new hacks, insights and ideas. Want to start a new business? There’s a podcast for it. Want to stay productive and inspired every day? Yep. That too. Want to delve into the deepest pits of psychology? There’s loads on that as well. From online marketing and success stories of entrepreneurs, to how to grow your business, there’s a plethora of motivational podcasts that are as useful for aspiring business owners as they are established entrepreneurs. Here’s our top five to get you started:

Aristotle, Freud, Darwin and Beethoven were all brainboxes who took extended walks during their work days. And Frédéric Gros, professor of philosophy at the Institute of Political Studies, Paris, even notes in his book A Philosophy of Walking: “It was not just that walking was a distraction from their work. It was that walking was really their element. It was the condition of their work.”

Clearly, we’re not the first to applaud the benefits of walking – both personal and in terms of better business – but we’re chuffed to join the long list of recognised thinkers that already have.