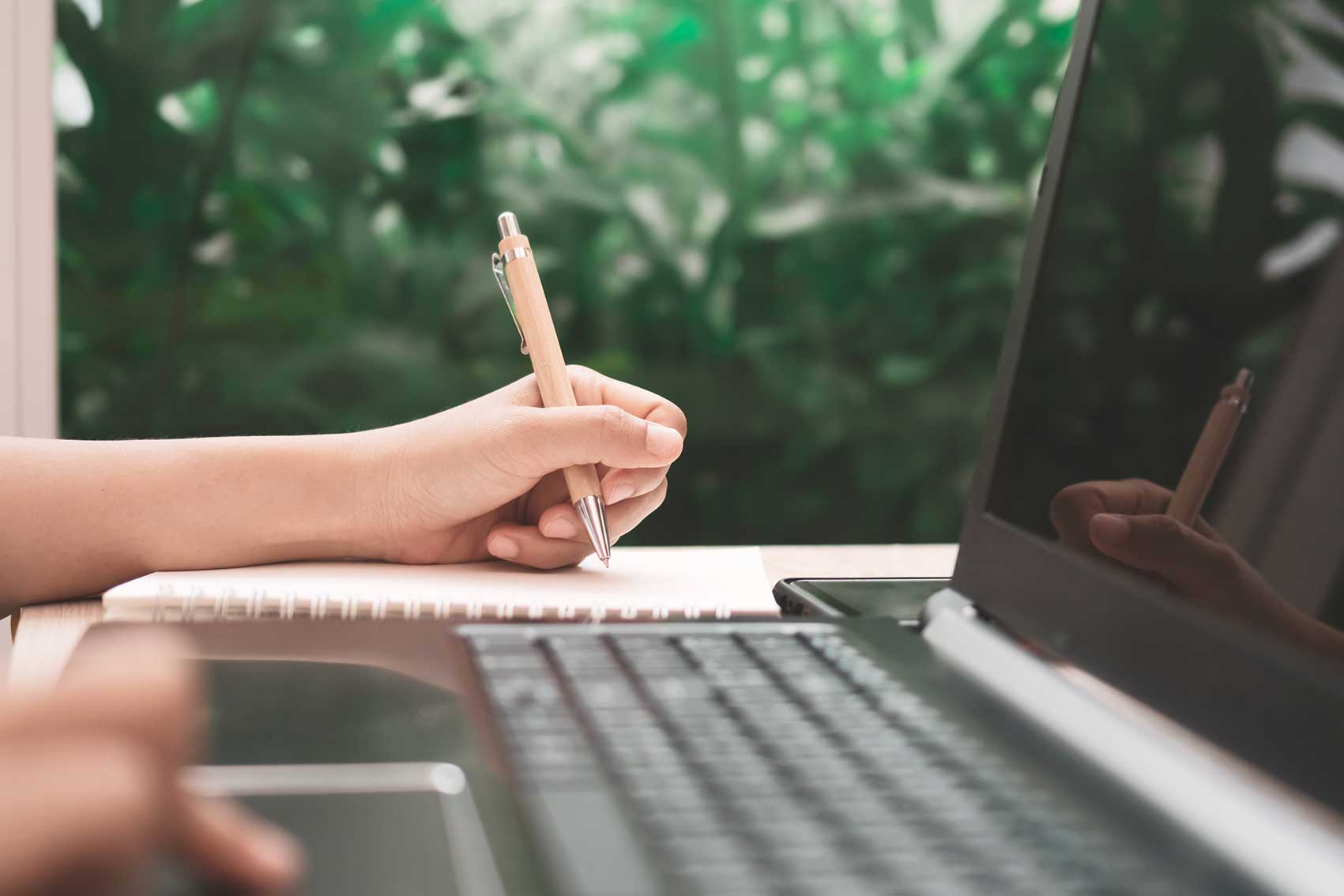 You know when you look at your to-do list and it stares back at you like an accusation pointing the finger of procrastination right in your face? No? Just me then. Anyway, even the most organised of mere mortals occasionally gets so pissed off with their ever increasing to-dos that they just to-don’t know where to start, or how to prioritise their proverbial arse from their proverbial elbow. What generally happens then is they just think sod it and head to the pub for a swift half/to the park for a motivational stroll/to the internet to look at videos of animals doing cute stuff (delete according to your personality type). Thing is, right now the pubs and parks are shut, normal is no more and a lot of us have more time on our hands than we have done since forever… Still not getting shit done? Over to you, Eisenhower.

Time management stress is one of the most persistent sources of pressure in the workplace, and generally happens as a result of feeling as though you have too much to do in too little time. Something former U.S. President Dwight D. Eisenhower shared his solution to in a 1954 speech to the Second Assembly of the World Council of Churches when he said: “I have two kinds of problems: the urgent and the important. The urgent are not important, and the important are never urgent.” Which is all very well, but what was he on about?

Effectively, the Urgent-Important Matrix, is a visual organisational tool that helps you decide on and prioritise tasks by urgency and importance, sorting out those that are less urgent and important than you think and which you can either delegate if you’re a shit-hot boss person, or which you can just kick to the curb entirely. Here’s the matrix in quadrant form: 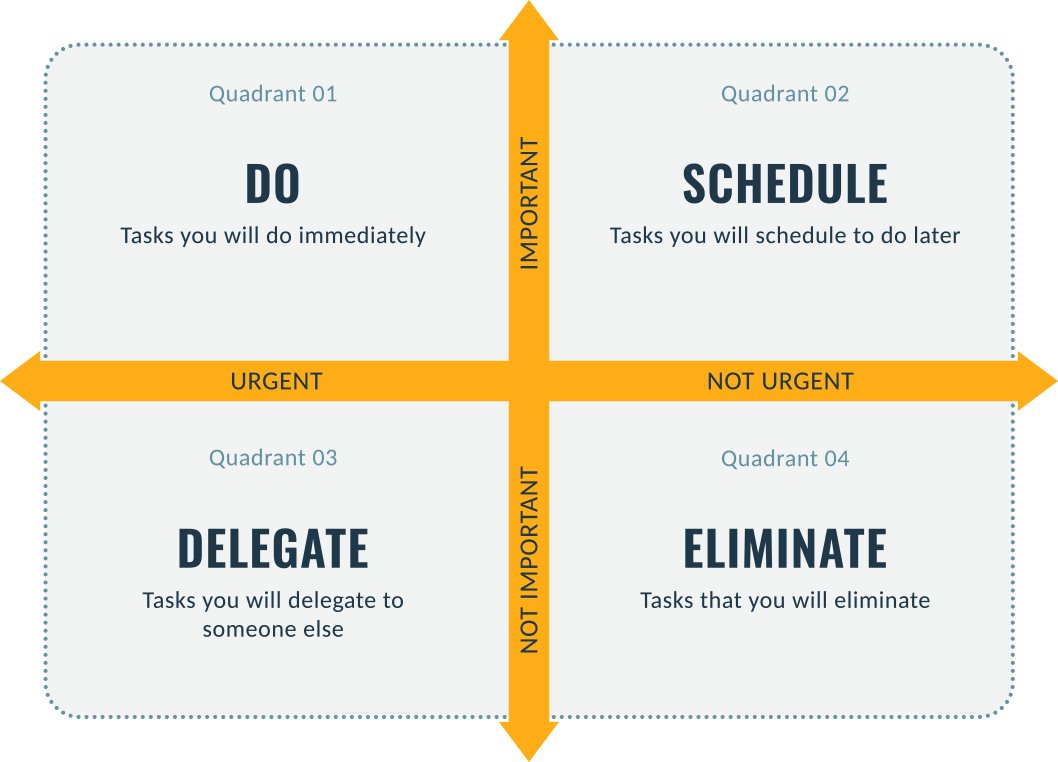 Here’s my incredibly highbrow definitions of what’s going on in each quadrant. Try not to be utterly baffled and/or intimidated by my scholarly way with words.

Quadrant I: Urgent AND important

So, imagine you’ve had a really good idea for a business, set yourself up on Kickstarter then not done a bloody thing to raise any money leaving you unable to pay the keen employees that you swiped by promising them the earth… Or, that your company is known for its anti-fur ethics and Tracey in operations has kicked up the biggest PR shitstorm you’ve ever faced by posting pictures of herself top to toe in chinchilla. You need to get these bad boys sorted out today. Now. Right now.

Quadrant II: NOT urgent BUT important

Thinking ahead for maybe three months, could your marketing strategy do with a spruce? Is the team on board with the company’s approach to identifying new clients? Maybe you’ve dotted all the i’s and crossed all the t’s (I hate this punctuation, but I don’t know how to write it without saying ‘is’ and then making a nonchalant sound at you) on a new project plan, but need to dish out whose responsibility it is to do what and when for the launch. These things are important, but not crush-your-company urgent, so schedule what you need to do over time, but don’t freak out about it.

Quadrant III: Urgent BUT NOT important

This one’s a bit weird because inevitably John from finance will think that his ‘5 minute’ questionnaire on how best to implement a fair system of both coffee making and cup cleaning in the communal kitchen is incredibly pressing. The truth? No one gives a flying one John, sorry. This is all about delegation: matters that are less important to you than others, but that are still considered vital within a company situation – if someone calls you for an urgent favour, for example, or suggests it would be great if you could join a meeting, suggest a colleague that’s as well placed to sort out the favour or attend the meeting. The idea isn’t to dish out delegation willy nilly like a madman that simply can’t be arsed, so keep track of anything you’ve successfully swerved and make sure it’s been done properly by way of a quick email or phone call later.

Quadrant IV: NEITHER important NOR urgent

Time-waster central, this judgemental square of non-significant, non-crucial crap is one that your inner high horse will chuckle at, dismissing the idea that you fill any part of your day with distractions, but that the mirror to your soul will belly laugh right back at admitting that OK, you might have had a little look at Instagram, been lured in by a pruning and planting feature in Guardian lifestyle, and done a quick Buzzfeed quiz to determine what type of cheese you are. We all get distracted from time to time, generally when we don’t know how best to use our time, which brings us beautifully full circle. Incoming personal calls, email chains to ‘brainstorm’ possible Christmas party venues, meetings about things that don’t concern you right this minute – all of this stuff goes in quadrant four, which should actually named ‘just don’t bother mate, honestly, it’s not worth it’.

So, now you’ve been enlightened by that symphony of highly scientific explanation, what on earth are you supposed to do now? What you need to do is take a look at what you get up to in a day and dish out your tasks and activities according to which quadrant they belong in. Be honest and be thorough, then rearrange your day (and therefore your time) to tackle what’s most crucial first.

Rumour has it, those people that we all want to be a little bit more like, but secretly slag off a bit in our heads because deep down we just want to be a bit more like them spend 80% of their time in quadrant II. If you live at Quadrant II, Organised Rd, Smuggington, it’s said you’ll spend most of your time pro-actively working on new opportunities and high-leverage projects instead of wasting time overreacting to pressing issues and other people’s needs. End game? Measured and significant progress towards goals, active prevention of crises when most needed and a more calm and focused life. Who doesn’t want to live there? Exactly.

Start by getting rid of every damn thing in quadrant IV – if you want to Instagram your lunch, great (you weirdo), just do it in your free time; turn off notifications; turn your phone off when you need to focus; stop playing Solitaire and for the love of life itself, don’t ever, ever go near the Daily Fail ‘showbiz’ pages. Next, optimise everything in quadrant III – in the grand scheme of things, they’re not your top priority but they are considered urgent and are often important to someone else. Batch any similar tasks together i.e. take an hour out each day solely to reply to emails; use any tech you can to make your life easier such as online shopping; delegate where possible; and, crucially, identify what time of day you work best at and don’t waste this gold on quadrant III – save it for quadrant I. Quadrant I priorities you can neither escape nor avoid – chances are you won’t meet a sticky end if you don’t do them, but putting them off will bring serious consequences and no one likes those; block out distractions, power through like a boss and always tackle these tasks at your most productive time of day.

The more you hone in on quadrant II, scheduling time to allow your creative juices to flow, developing business strategies, creating opportunities and building relationships across the board as you go, the less quadrant I activities will pile up on your plate as you will have actively prevented them from happening in the first place. Now, you’re on your own. Get off your phone and go and sort your life out.